Home » DIY Pallet » How to Make a Pallet Headboard

How to Make a Pallet Headboard


It only took about 5 hours of actual work, and 10 hours of stealth hunting, but it’s done. You might be thinking deer hunt, but I’m actually referring to Whitney’s master bedroom headboard pallet project. 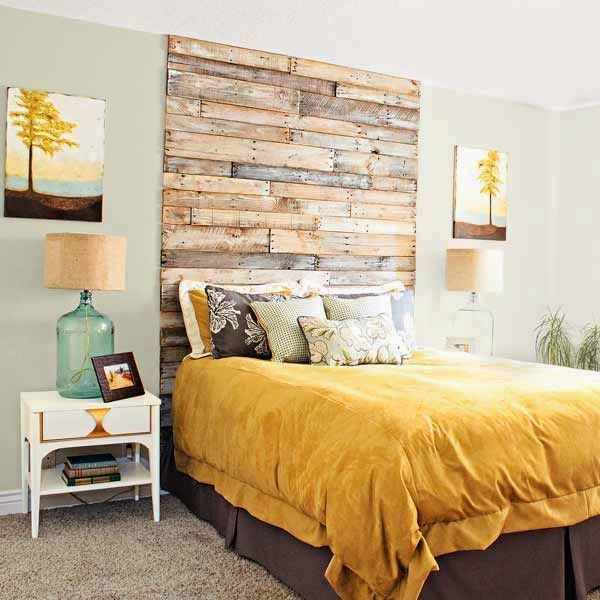 Whitney originally put this idea into our mood board for the master bedroom, so I knew the plan was in the works, I just wasn’t prepared with the process of actually getting pallets. Of course, now that we have what we need (thanks Electrical Wholesale Supply, Sherwin Williams, and some helpful neighbors), we see them everywhere. 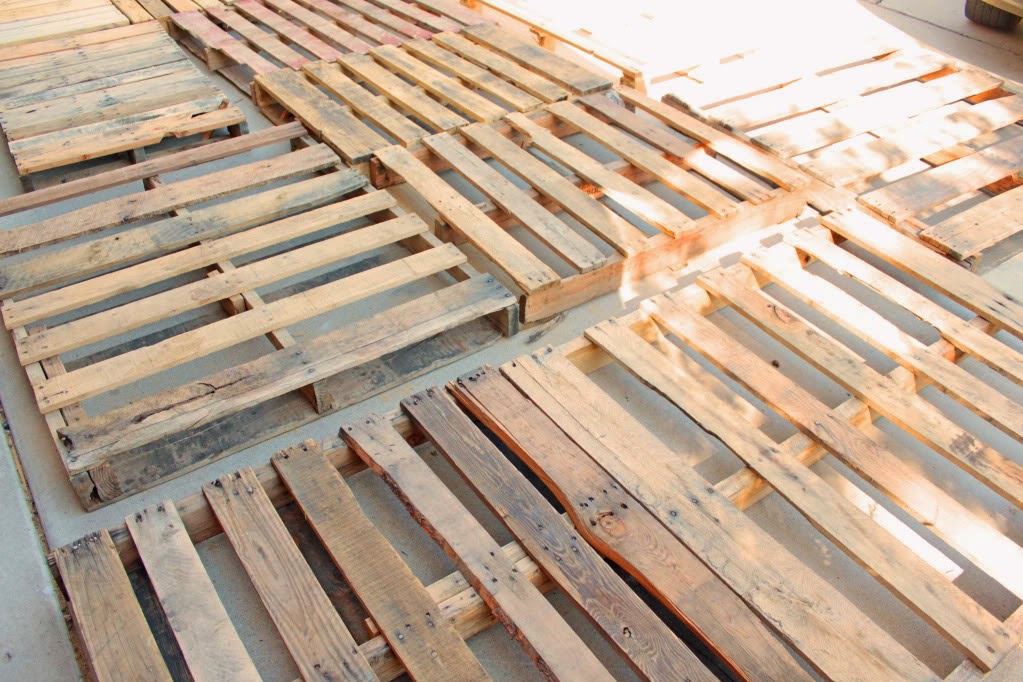 Here’s what our driveway looked like at the beginning of this project. We first laid out the pallets since we wanted to lightly brush the wood with a white wash, helping to highlight the natural grain and knots embedded in the wood. We kept the boards in pallet form, making the painting and sanding a bit easier. 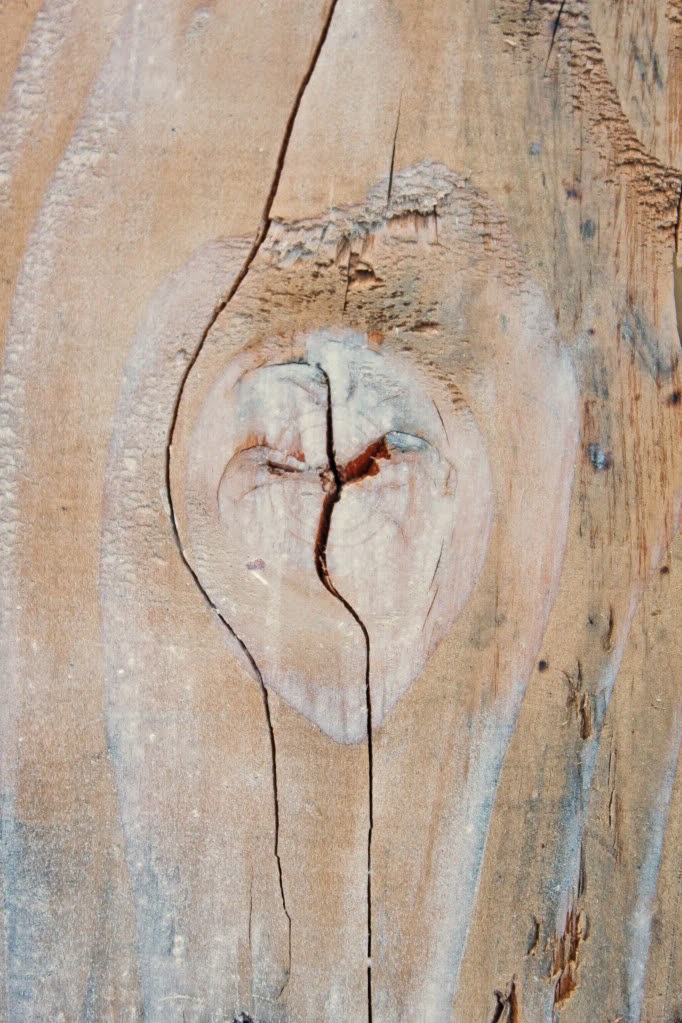 We were prepared with all sorts of different formulas to give it the look we wanted, but settled on an old, mostly-used can of white latex paint that we watered down to a 1:1 ratio. 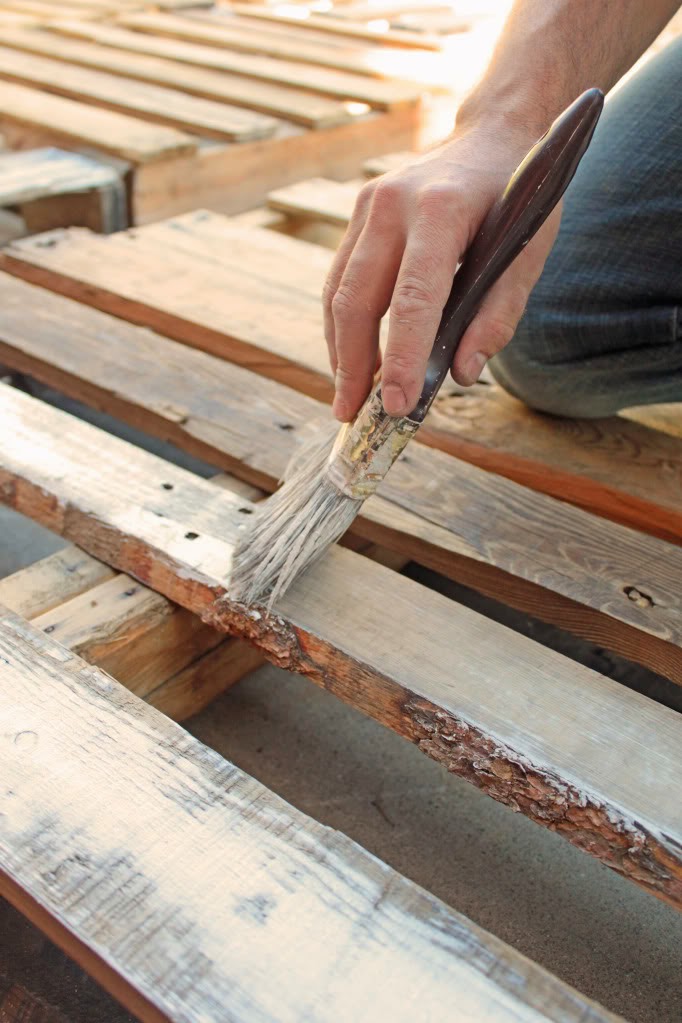 We weren’t too concerned about an even coat of white wash, we really just wanted it to have a relaxed “shabby” look. We then took 60 grit sandpaper and lightly sanded the pallet boards

I’d heard reports of how difficult it can be to get the pallet boards off of the braces, and knew it’d take some brute force. Unfortunately, I found out that force really wasn’t the answer, since starting at the ends usually resulted in my incredible strength ripping the boards apart. I felt buff, but that didn’t really help us in completing the project. 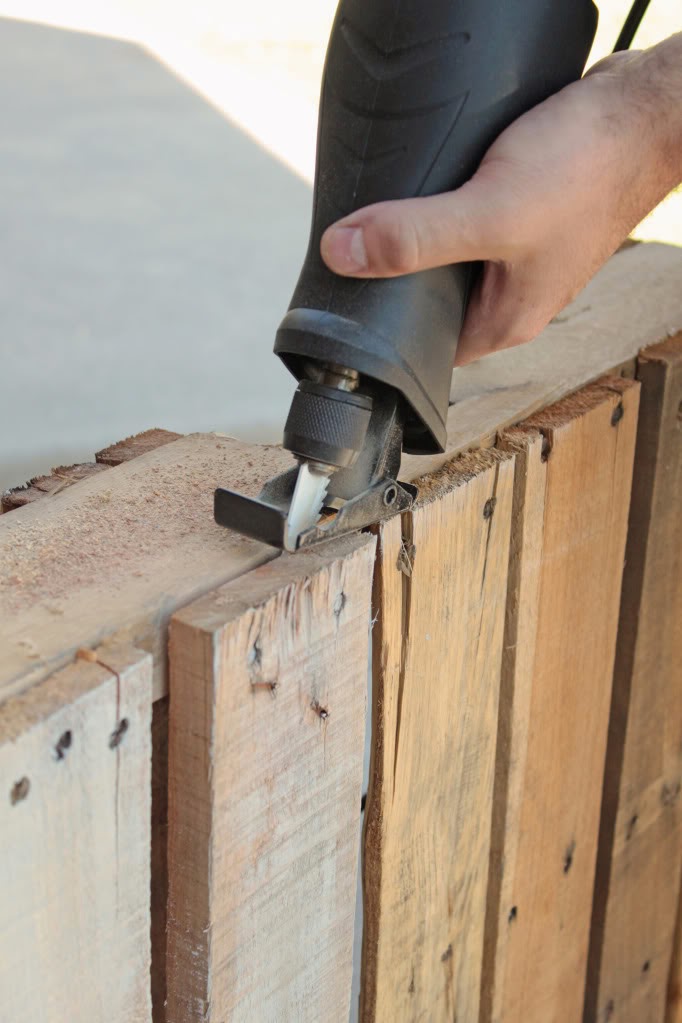 The key to neatly getting the pallet wood off the pallets themselves was using a sawsall to cut through nails on the ends first. I really like that this method leaves in some of the nails too – gives it an authentic look. 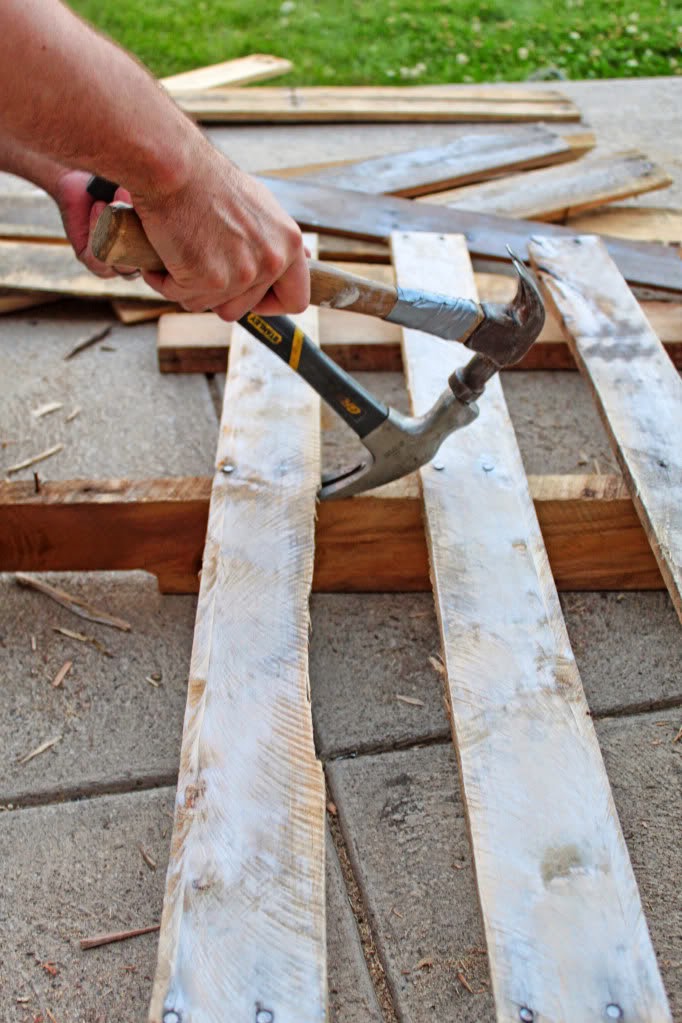 Then, once the sides were freed, I simply took a couple of hammers and pryed the center nails up. Whitney then pulled any nails that protruded and stacked the wood in order of board width. 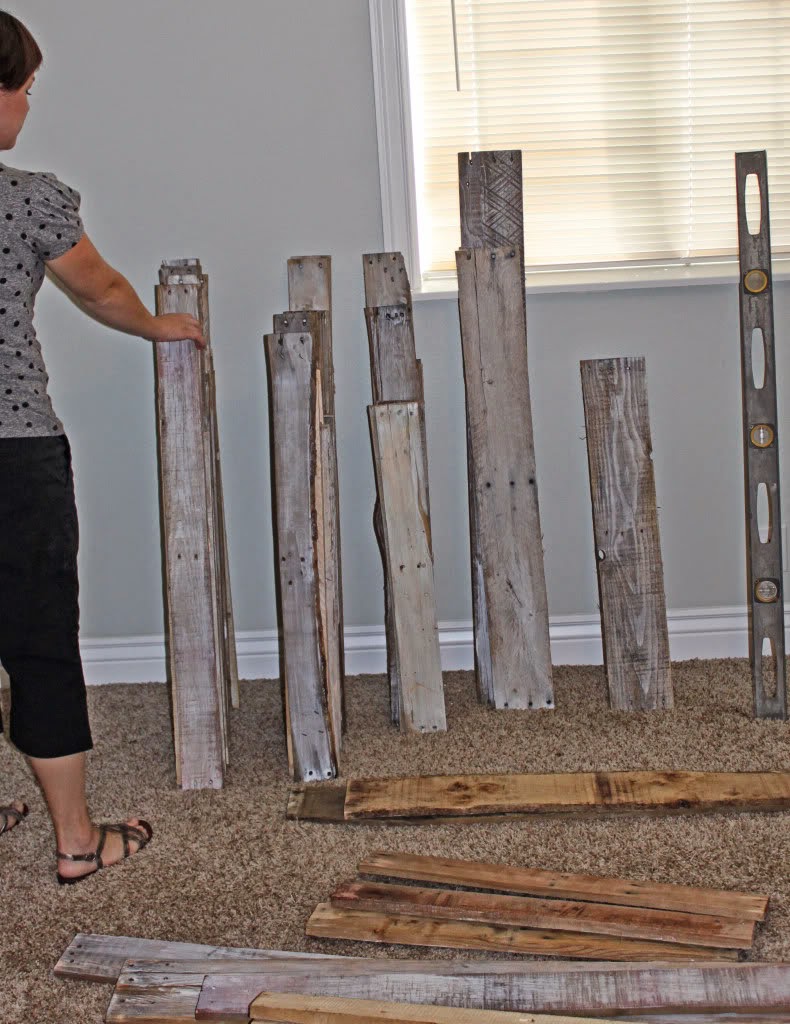 After carrying the pallet boards upstairs, we taped up lines of where our head board would be, making sure to find the center of the wall. We wanted the headboard to only come out 2-3 inches on each side of the mattress, so we marked where the headboard would end. 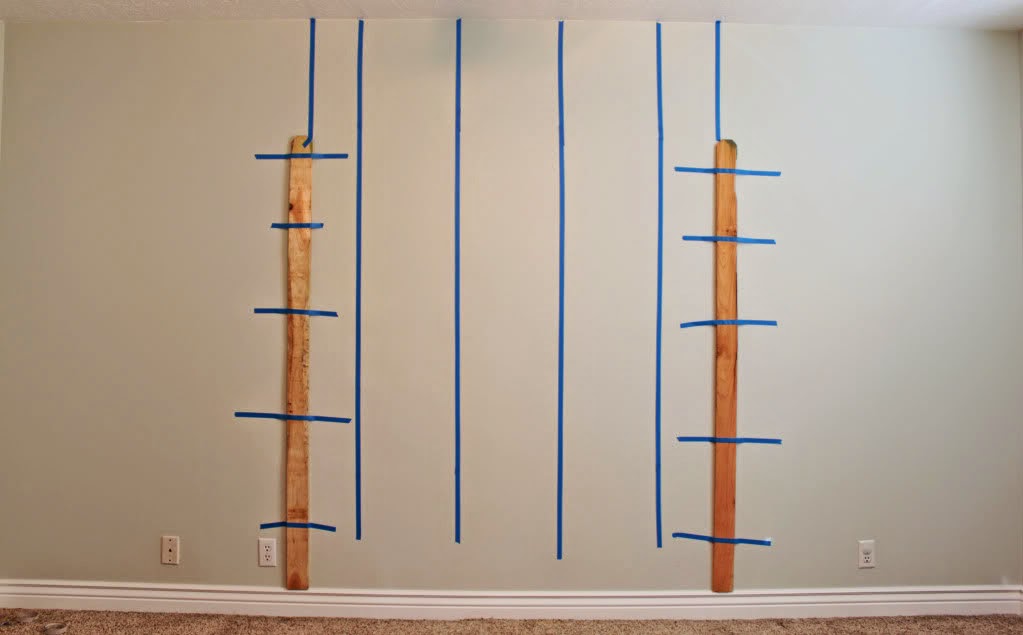 Then, using a stud finder, we marked with tape where the studs were, so that we could use as few nails as possible to hold up the pallet boards. I actually taped up a couple of longer pieces of wood that I picked up out of the Home Depot Cull bin to help us easily see the ends of the headboard, and be able to measure and cut them accurately. 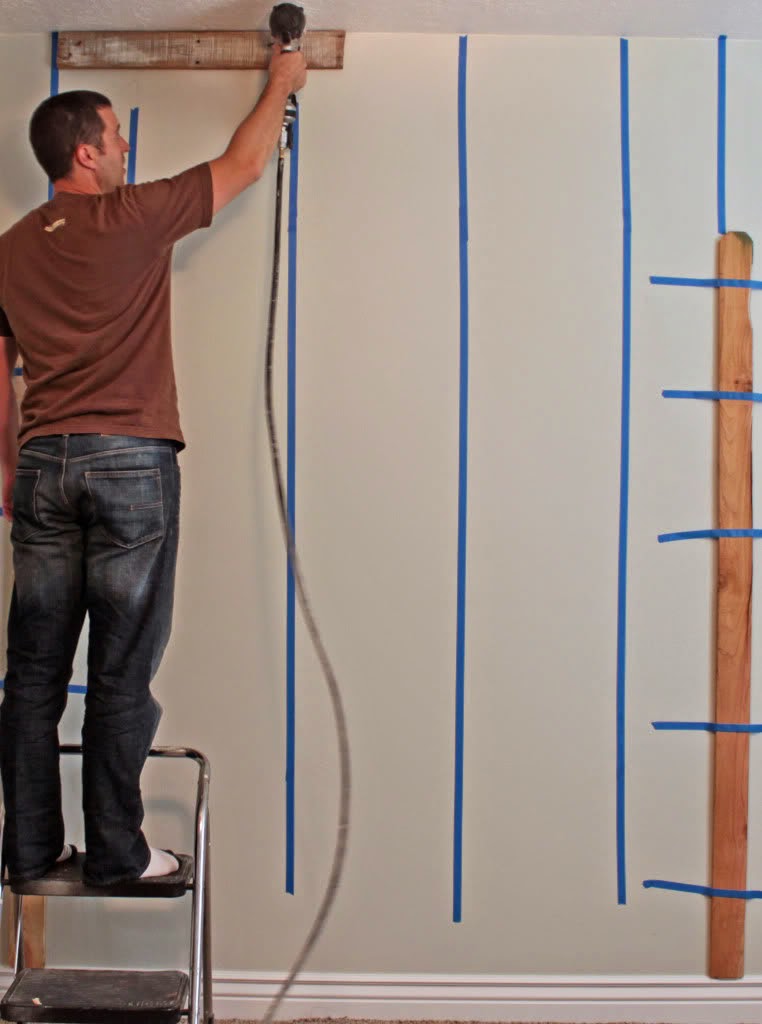 Whitney wanted a floor to ceiling effect to help give our room more height, and since she didn’t want to risk having any funny cuts at the top of the headboard, we decided to start at the top of the wall. Ideally, we tried to vary the pattern, so that all the pieces didn’t end in the same place on the wall. Then, using a pneumatic finishing nailer with 1.5” nails, we put two to four nails in each board to hold it up, using the wall studs as supports. 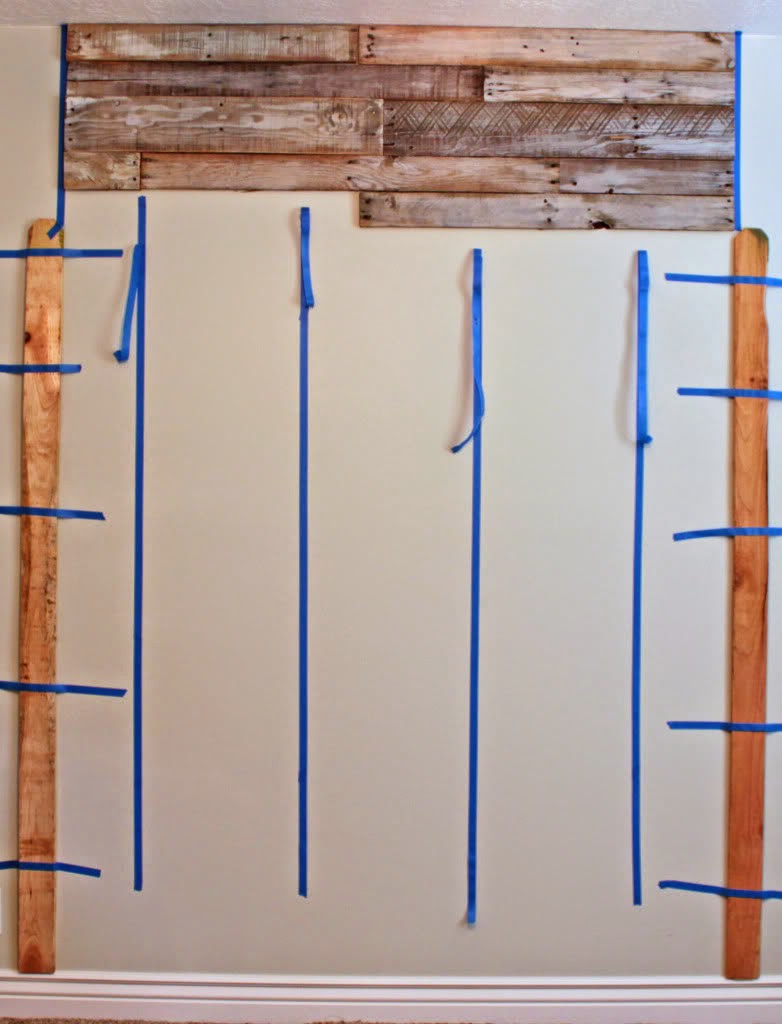 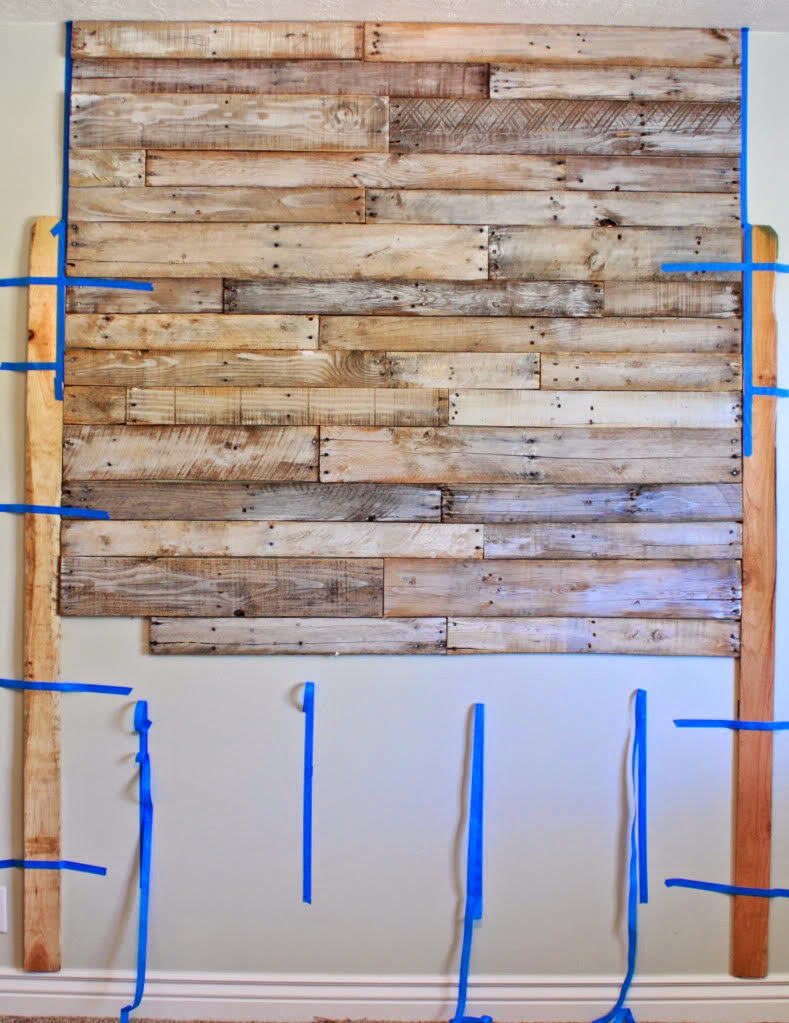 We really tried to keep the same width size of the board consistent across each individual row, spacing out our really wide pieces throughout. 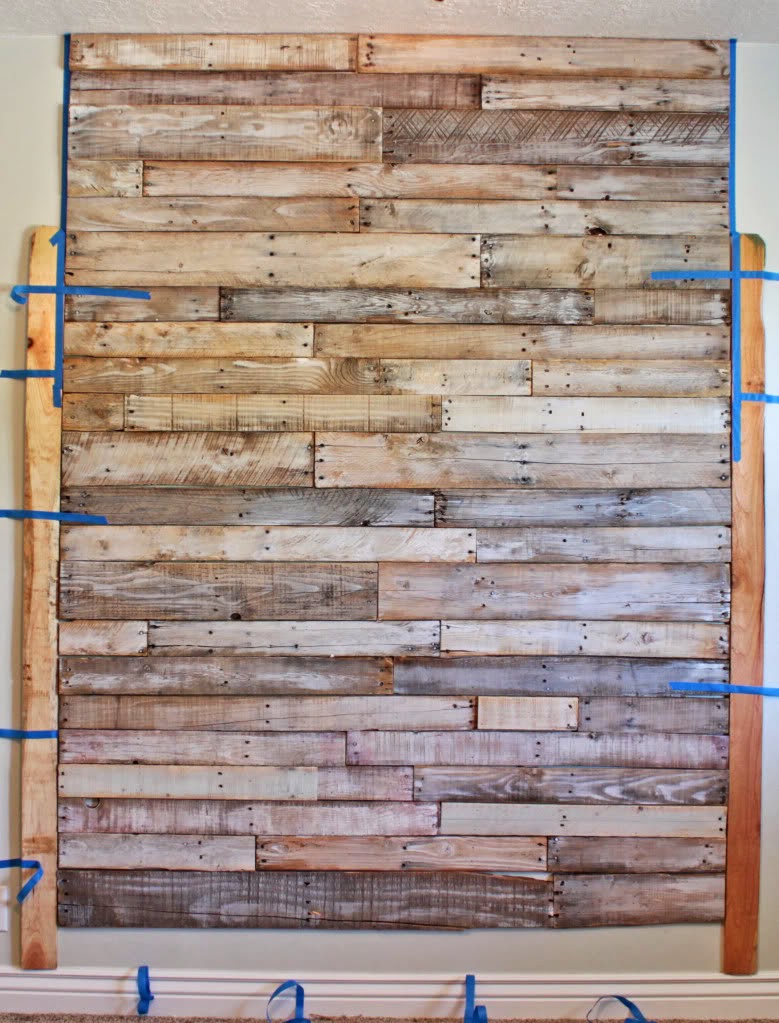 We moved the blue tape down as we went, since gaps and holes are just part of the beast – and we didn’t wan’t the blue strips peaking out from between the boards. 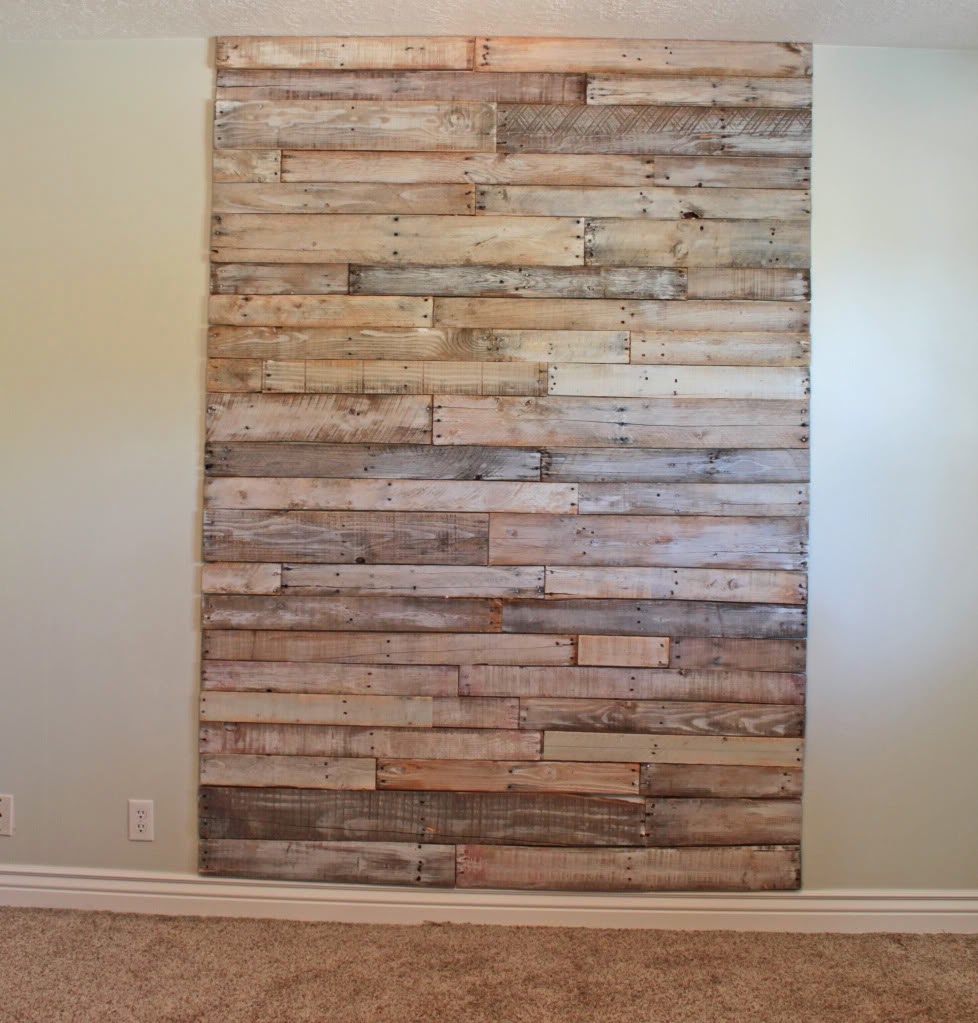