This is the most fun you can have with four ingredients. 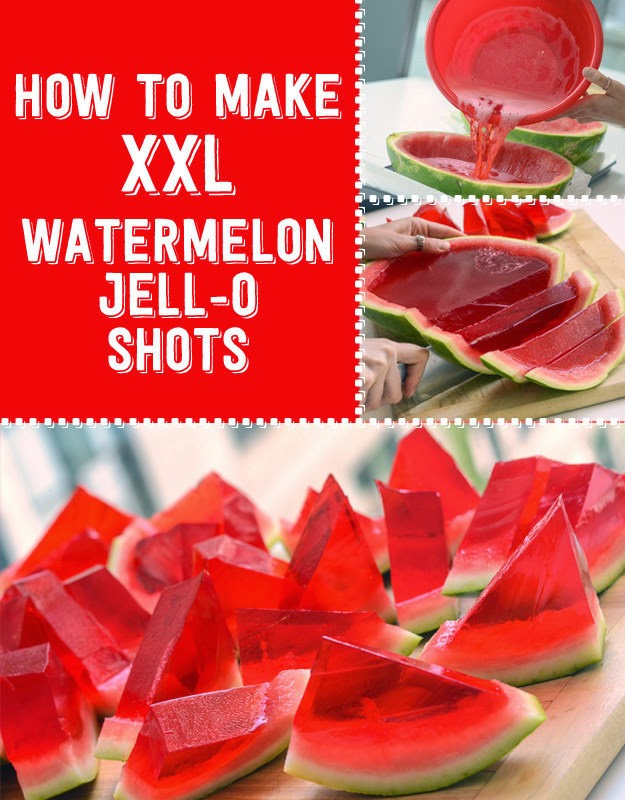 WARNING: These Jell-O shots will make everyone love you. 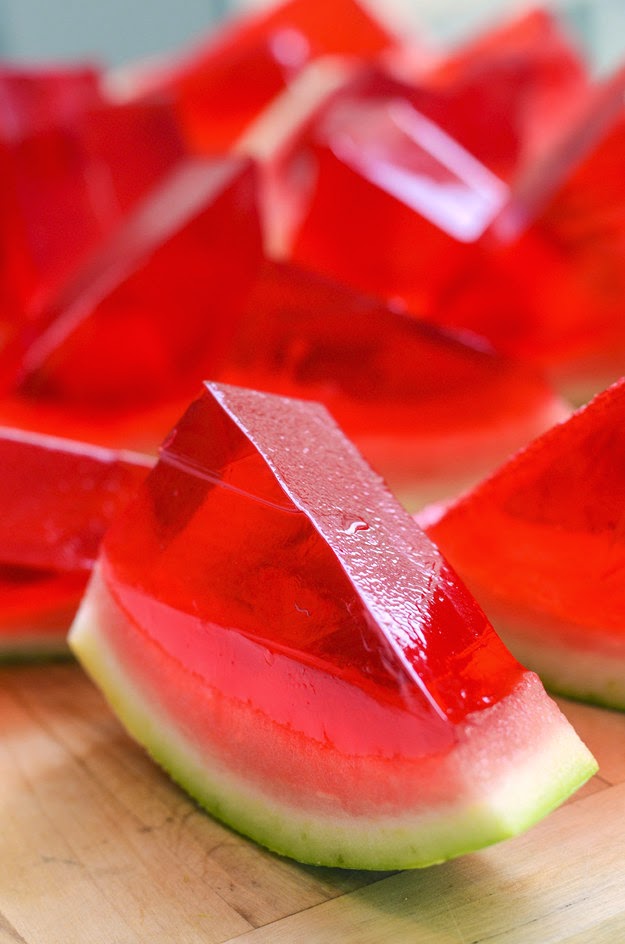 To make the Jell-O shots, you need only four ingredients. 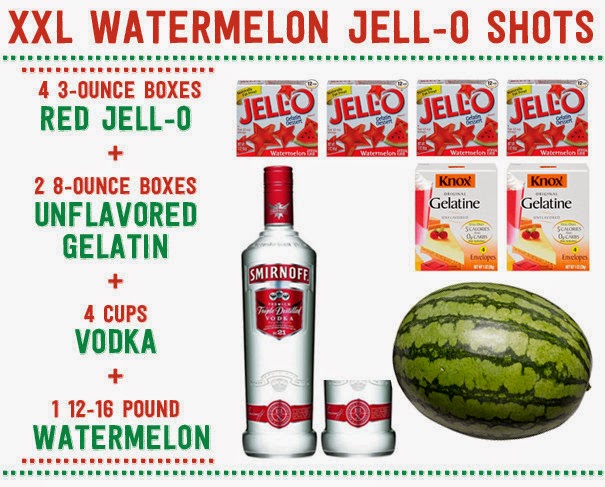 Once you have the ingredients, you’ll need the following equipment: 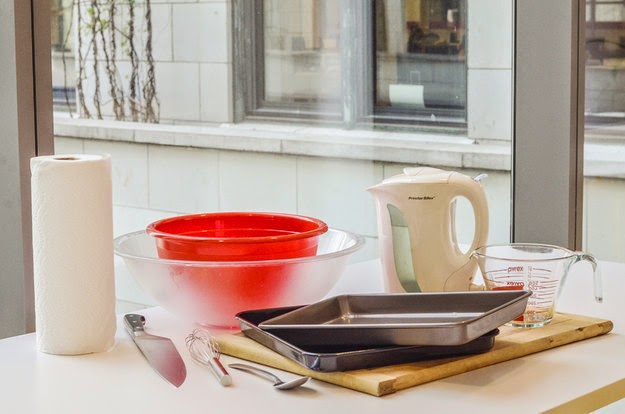 1. Paper towels
2. 2 large bowls (one to mix the Jell-O, one for the watermelon you’ll scoop out)
3. 2 small sheet trays or baking dishes (each needs to be big enough to fit a watermelon half)
4. Liquid measuring cup
5. Electric kettle (or you can boil water another way)
6. Cutting board
7. Kitchen spoon
8. Whisk
9. Chef’s knife

First, cut your watermelon in half, lengthwise. 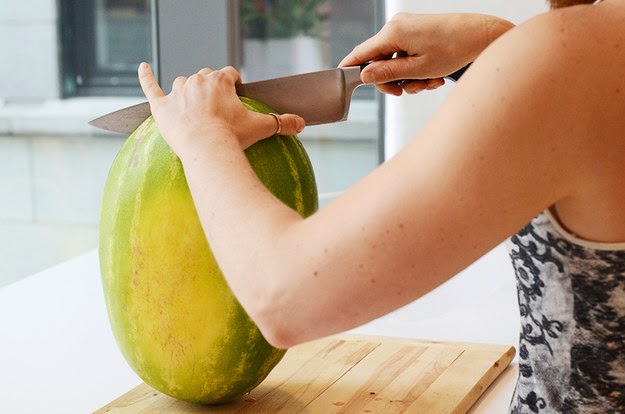 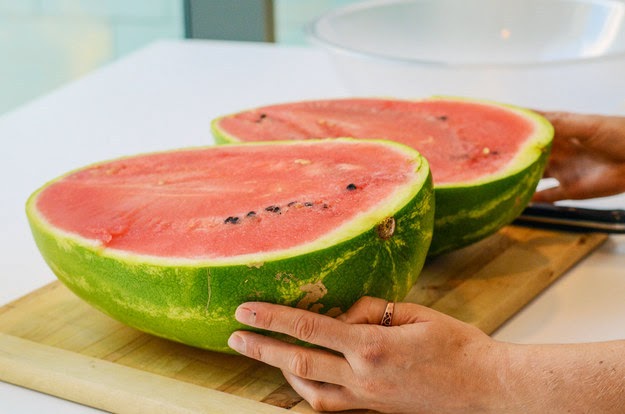 Keep in mind when you’re cutting the watermelon that you don’t want the halves to roll around as the Jell-O sets. So, if there’s a flatter part, make that the base for one of your halves.

Use your knife to slice all the way around the perimeter of the watermelon flesh, about an inch from the rind. 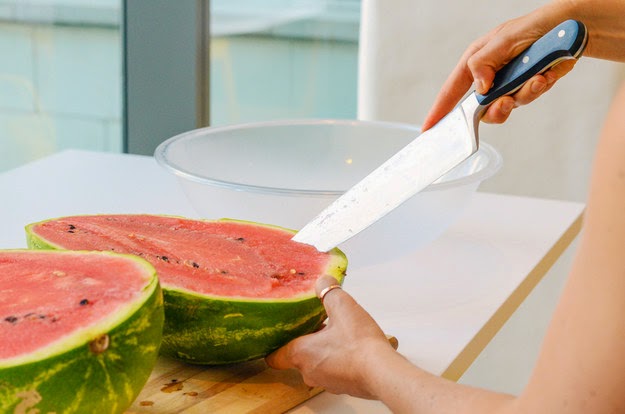 Be careful not to pierce the skin, since this will lead to leakage.

Then, use a spoon to scoop out the flesh. 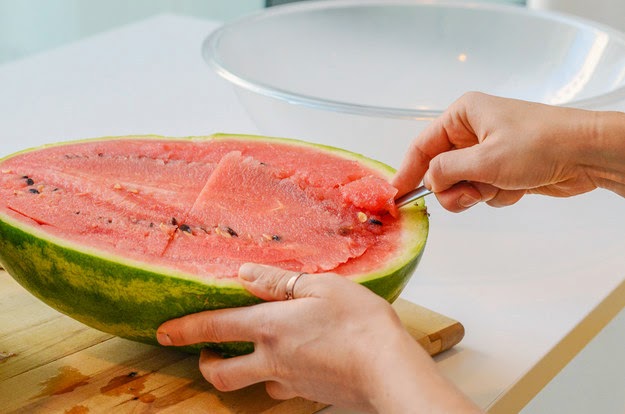 Scrape down the insides so that the surface is relatively smooth and there’s about half an inch of red flesh left on the rind. You’ll end up with two watermelon “bowls” ready to be filled with delicious, boozy Jell-O. 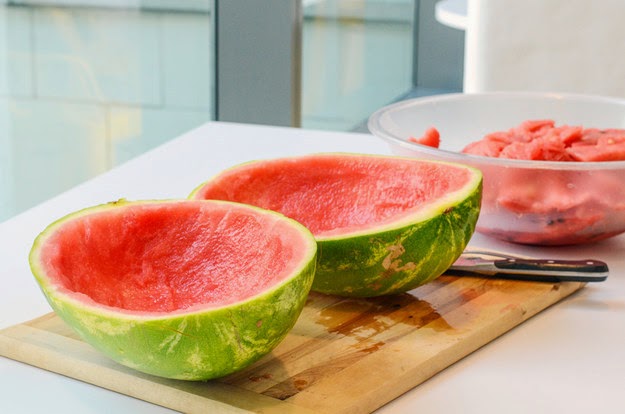 To keep the watermelon bowls from moving around on the trays, you’ll have to create a bed with paper towels. 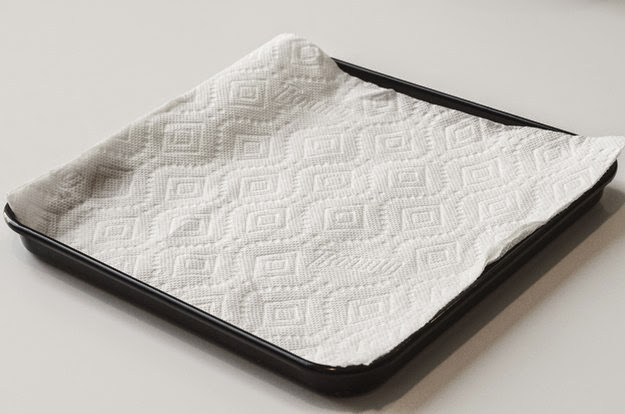 First, line the bottom of each tray with two paper towels.

Then, put two folded paper towels on opposite sides of each tray. Your watermelon will lie in that gap in the middle. 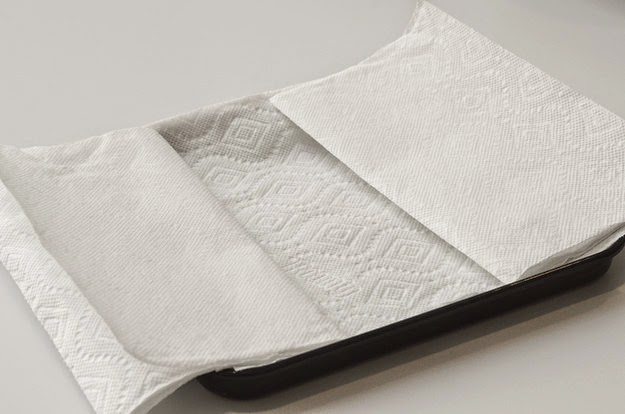 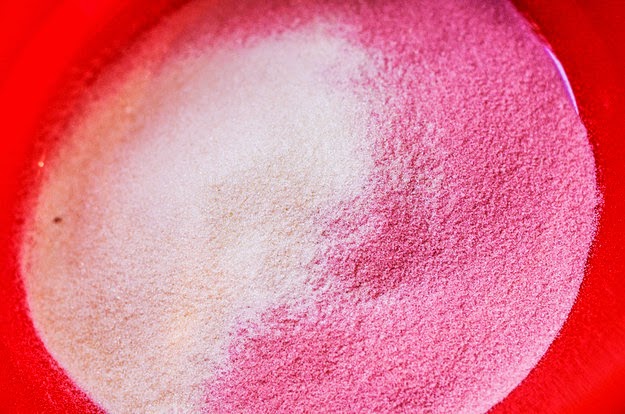 Boxed Jell-O mix already has gelatin in it, but for this recipe you need to add extra, since you want extra-firm Jell-O shots that will hold the shape of the watermelon slices and look impressive and amazing.

Add 4 cups of boiling water and whisk together for 2 minutes, until all of the gelatin has dissolved. 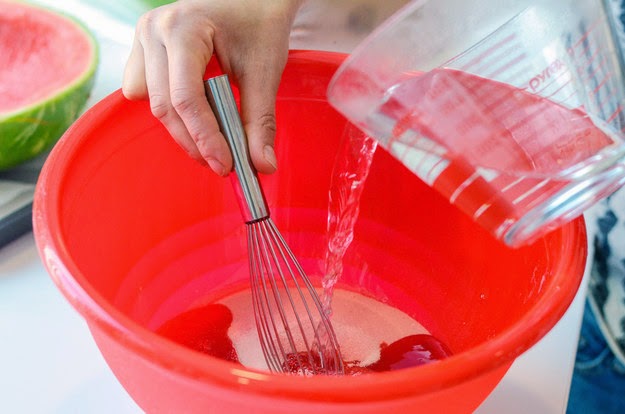 Then add 4 cups of vodka, and whisk just to mix everything together. 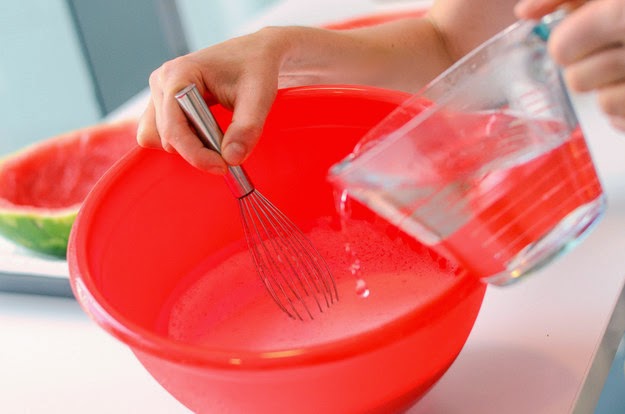 Now, divide the Jell-O mixture between the watermelon bowls on the paper towel-lined trays. 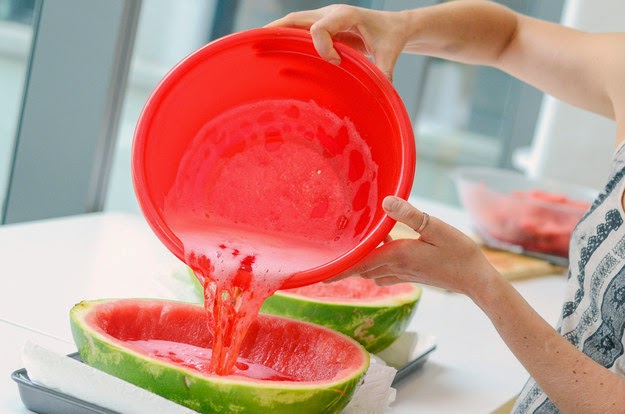 Refrigerate for 4 hours, until the Jell-O is completely set. 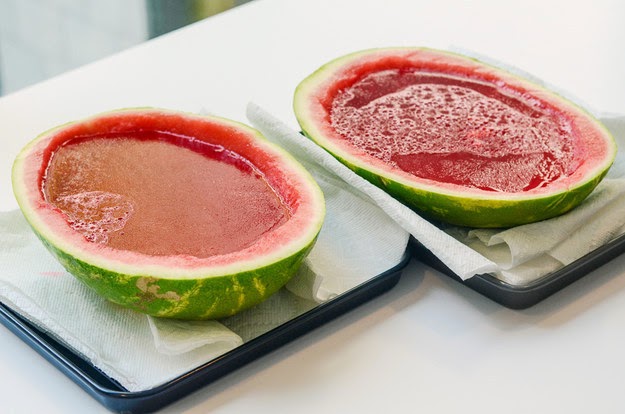 The Jell-O will shrink a little bit as it sets, which is OK.

Now, it’s just a matter of slicing! First cut each half into 1-inch slices, crosswise. 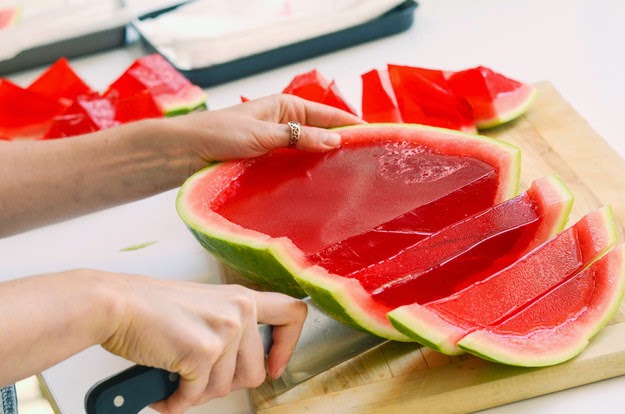 Then, cut each big slice into 2 or 3 smaller wedges. 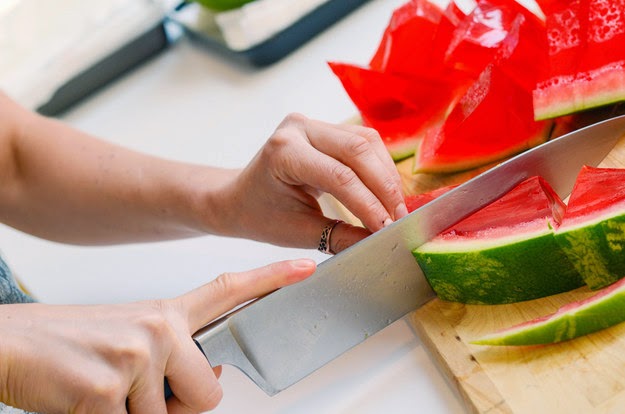 Get ready for the amazed looks on your friends’ faces, and serve! 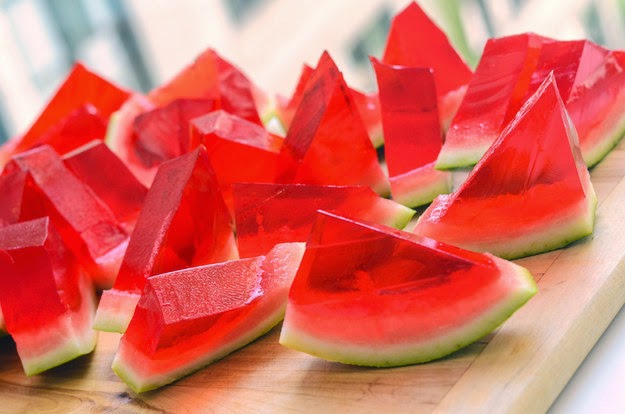 (You’ll end up with a lot of wedges, which is definitely a good thing.)

So perfectly sized! So secretly boozy! 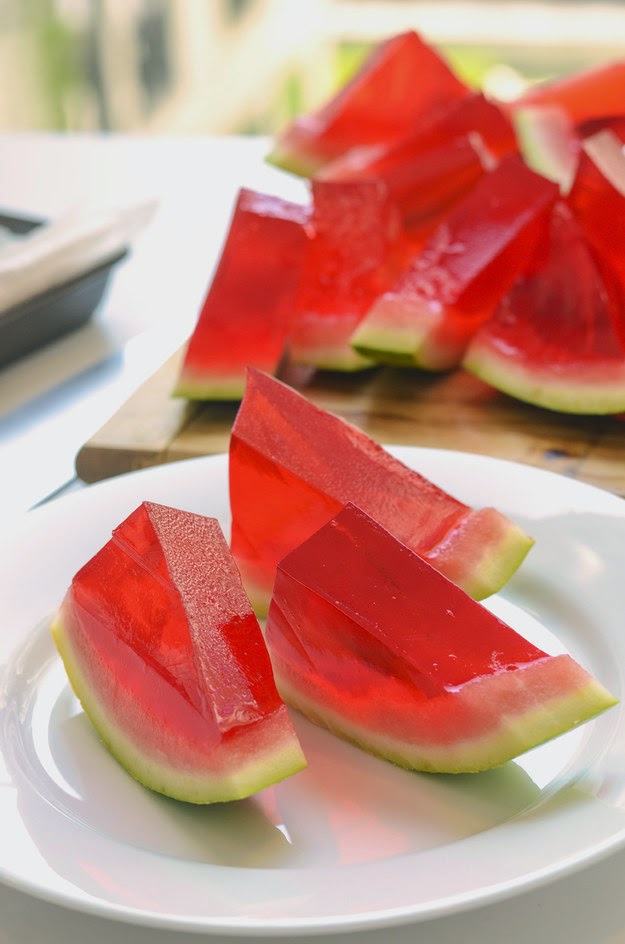 And so perfect for the 4th of July, or any summer party where fun is allowed. 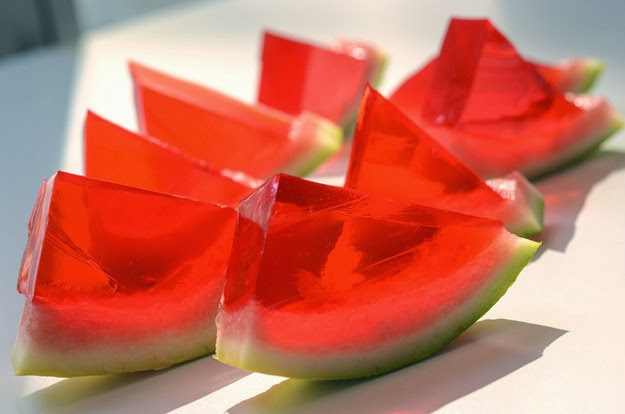 2. Use your knife to slice all the way around the perimeter of the watermelon flesh, about an inch from the rind. Be careful not to pierce through the skin, as this will lead to your Jell-O leaking out. Then use a kitchen spoon to scrape out the rest and create a smooth bowl with roughly 1/2-inch red watermelon flesh left on the rind.

3. Line two small, rimmed baking sheets with paper towels in a way that creates a bed for your watermelon bowls. The idea is to create enough support to keep the watermelon bowls from rolling at all while they’re in the fridge. Put one bowl in the center of each tray and set aside.

4. In a large mixing bowl, combine the Jell-O mix and the unflavored gelatin. Add 4 cups of boiling water and whisk until the gelatin is completely dissolved, about 2 minutes. Add the vodka all at once and whisk just to combine.

6. When Jell-O is set, cut each half into 1-inch slices, crosswise, then cut each slice into 2–3 wedges, and serve.